Five members of the Lodge family joined civic dignitaries as the Mayor, Councillor Geoff Austin – performing one of his last tasks as the borough’s first citizen – unveiled a plaque.

Canon Edward Perera of Our Lady Immaculate, spoke of the “peace and light” which can follow times of grief and sorrow, while Deacon Peter Sebastian of St Raphael’s did a reading.  The dedication and blessing were performed by the Reverend Robert Stanier of St Andrew’s and St Mark’s.  “We comfort people and give them a shoulder of support” said the Vicar.  “Get the practical things right and we can offer them the spiritual support they need”.  Rev’d Stanier said that the Chapel was an important place where loved ones could spend last moments with the deceased, and that it was a haven of contemplation and reflection.

Director Beverley Lodge, welcomed everyone to the event, on a sun-drenched spring day, after the Epsom & Ewell Silver Band had played in the Mayor in.  She stressed the firm’s deep roots and family ties – the first Lodge funeral was conducted in 1780.

Chairman Robert Lodge had words of praise for Jane Day, the Funeral Arranger at Surbiton, and the all-important public face of the funeral business in the town. 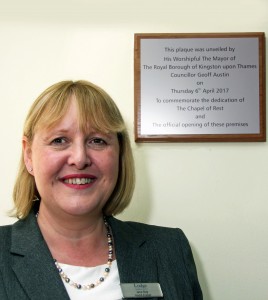 Cookies
- Our site uses cookies to improve your experience. Read More
Okay
BRANCH LOCATOR CALL US
We are sorry but we are unable to process your floral order within 48 hours of the funeral. Please telephone our office on 0208 818 7725 for further advice
May 29, 2022 05:35:55