Service of Dedication for Vickers-Armstrong Memorial Donated by Lodge Brothers 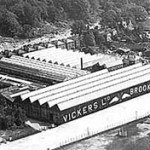 On 4 September 1940, 83 civilians working at the Vickers-Armstrong factory based in Weybridge lost their lives during a day time air raid; five of whom were unidentified or unclaimed. On 9 September 1940 these five people were buried in Burvale Cemetery; the graves remained without a memorial – until now..

A short dedication of the memorials by Rev’d Martin Fletcher from St Peter’s Church took place in Burvale Cemetery on Thursday 10 March 2016 at 2pm and was attended by the daughter and grandson of the late William Ernest Hunt.

“About a year ago I was approached by two Hersham residents and I agreed to do what I could to find out more about the 5 unidentified civilians who lost their lives in the Vickers air raid. I spent some time in the Library at the Brooklands Museum, many hours on the internet and combed through numerous archives – it was a daunting task.

We found the identity of one, and after further exhaustive searches I finally suggested that we should look into having Memorials made at least to record what had happened, even though 4 of the 5 names were not known. The daughter and grandson of the late William Ernest Hunt attended a service of dedication, having travelled from the North of England to see the marked grave of their relative for the first time.

I am sure local residents will join me to thank Lodge Brothers Funeral Directors for their thoughtful donation in memory of all five victims.