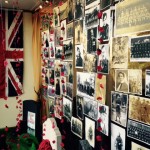 Annie Mackender, our funeral arranger at West Byfleet, was inspired by recent World War I window displays, and wanted to do something to commemorate Remembrance Day, marking the end of the war at the 11th hour on the 11th day of the 11th month.

She placed requests in local shop windows asking for members of the local community to bring in photographs of family members that had served in the war.

She was inundated with photographs and memorabilia and has scanned them and put into her display, and is receiving many comments from passers by.

Cookies
- Our site uses cookies to improve your experience. Read More
Okay
BRANCH LOCATOR CALL US
We are sorry but we are unable to process your floral order within 48 hours of the funeral. Please telephone our office on 0208 818 7725 for further advice
Jun 25, 2022 06:24:55