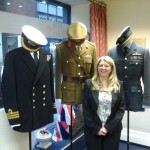 The Army uniform belonged to Major General Sir John Anderson, who served as a junior officer during WW2 in North Africa 8th Army at Tobruck. He later became the head of the Chief Royal Signals and lived until 21st September 2007.

The RAF uniform belonged to Wing Commander G.K.N Lloyd who flew a Hurricane during D-Day and was awarded the Air Force Cross by Queen Elizabeth.

The Navy uniform belonged to an unknown Commander who served in both World War 2 & Korea in the 1950’s.

Cookies
- Our site uses cookies to improve your experience. Read More
Okay
BRANCH LOCATOR CALL US
We are sorry but we are unable to process your floral order within 48 hours of the funeral. Please telephone our office on 0208 818 7725 for further advice
Jun 25, 2022 05:29:02