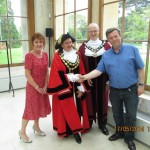 Steve Knight, funeral arranger at Lodge Brothers Twickenham Branch, recently organised a Tea Dance on behalf of the Mayor of Richmond to raise funds and awareness for her local charities.

Steve said ‘It was great fun arranging the event with the Mayor and a fantastic amount was raised for her charities.’

Quentin Edgington District Manager for Twickenham said, ‘The Mayor of Richmond took part in the Dedication of our new Twickenham Branch a few months ago and talked with Steve about various projects in the pipeline, and together they arranged the very successful Tea Dance which took place in Kew Gardens.’

Cookies
- Our site uses cookies to improve your experience. Read More
Okay
BRANCH LOCATOR CALL US
We are sorry but we are unable to process your floral order within 48 hours of the funeral. Please telephone our office on 0208 818 7725 for further advice
Jun 27, 2022 06:22:24