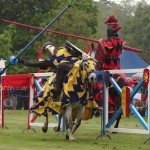 ‘The Barons’ Gathering’ took place on Saturday 13 June 2015 at the Lammas Park in Staines-upon-Thames. As a prelude to the Magna Carta Celebrations it highlighted life experienced in 13th Century Britain with medieval music and dance, jousting displays, combat demonstrations, falconry, children’s activities and much more. Local schools worked on creating special Magna Carta banners and ‘Lodge Brothers’ banners were also on display on the day to mark this momentous occasion.

Meanwhile on Englefield Green Village Green, John Scott MBE and Cllr Michael Kusneraitis hung banners along St Jude’s Road ahead of the celebrations. Flags denoting freedom, democracy, equality and justice flew above the branch as The Queen, senior royals and dignitaries gathered at Runnymede Meadows on Monday 15 June where the sun came out on cue.

Cookies
- Our site uses cookies to improve your experience. Read More
Okay
BRANCH LOCATOR CALL US
We are sorry but we are unable to process your floral order within 48 hours of the funeral. Please telephone our office on 0208 818 7725 for further advice
Jun 25, 2022 06:42:52