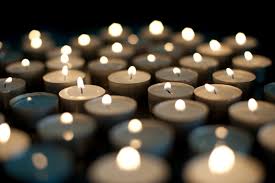 Over 330 people attended the annual ‘Thanksgiving and Memorial’ Service held by Lodge Brothers Funeral Directors in the churches of Ashford. This year the event took place at St Michael’s Church in Clarendon Road and was led by the Priest-in-Charge, Monsignor Jim Overton.

The service is a very moving occasion with the highlight being the time where people can light a candle and place it at the altar in memory of a loved one who has passed away this year. With some people lighting more than one, nearly 400 flames gently flickered as guest violinist, Lisa Rollin, played the haunting theme from the film, ‘Schindlers List’. She also played two other pieces, ‘Chi Mai’ and ‘Walking in the Air’.

During the rest of the service, readings and carols were enjoyed as contributions were given by Lodge Brothers Chairman, Robert Lodge and local District Manager, Richard Leachman. The Staines Lammas Band also played a selection of carols before and after the hour-long service.

Mr Leachman said, “I know many people who attend each year see these special times as the forerunner to their Christmas; remembering their loved ones, before anything else, is very important to them. I am pleased that so many people were given the opportunity to personally reflect and yet publically share in this moving event”.