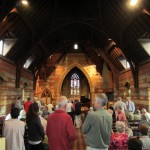 Two events in the village of Englefield Green were supported by Lodge Brothers recently. The annual Summer Fayre took place at the end of last month and the local family Funeral Directors were there. Banners and sponsorship were in evidence as the Fayre attracted huge numbers from the community.

Then on Saturday 5th July, District Manager, Richard Leachman and Branch Arranger Susan Areington joined 150 people at St Jude’s Church to celebrate the opening of the ‘John Monsell Room’, the final part of the ten year long rebuilding work undertaken by the church. It was officially opened by Professor Paul Layzell, Principal of Royal Holloway College.

A piano recital preceded the opening.