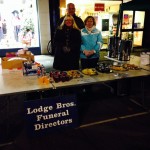 Mince pies, biscuits, crisps and other drinks were also handed out in return for a donation to charity. The stall raised over £180 in two hours!

Richard commented, “Despite the cold, it was good to raise such a princely sum in little over two hours! The money will be given to ‘The Greeno Centre’, a day centre in Shepperton which serves Christmas lunches throughout the festive period to the lonely and elderly. Lodge Brothers always try to help our local community through supporting worthy causes”.