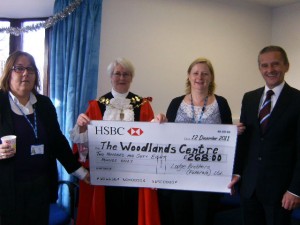 Lodge Brothers, the family run funeral directors, recently gave a cheque for £268 to the Woodlands Centre for Dementia Care based at Hillingdon Hospital.

The cheque was presented by Peter Breslin, of Lodge Brothers to Beverley Smith, Sector Manager, Harrow, Hillingdon and Brent Older People and Healthy Ageing. Also in attendance and seen in the picture are Councillor Mary O’Connor, Worshipful Mayor of Hillingdon and Robyn Durand, Director of Operations, Central and North-West London NHS Trust.

The money was raised at a raffle held at the Waters Edge Restaurant in Cowley where the six Lodge Brothers branches in the Hillingdon area hosted a Festive Supper. Personnel from Nursing and Care homes in the area were invited as well as staff from Health Centres and Doctors Surgeries, the local Registrar’s Office and Hillingdon Hospital. About fifty people in total attended and a great time was had by all.

BRANCH LOCATOR CALL US
We are sorry but we are unable to process your floral order within 48 hours of the funeral. Please telephone our office on 0208 818 7725 for further advice