Hearing Dog for the Deaf ‘Nell’ Walks for Charity 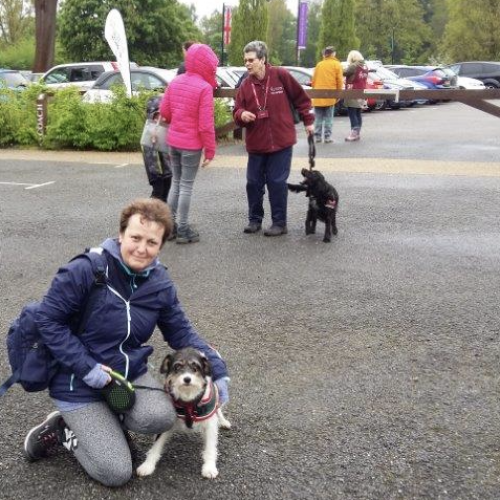 On Saturday 28th April 2018, Nell the rescue dog arrived at Saville Gardens in Englefield Green with her owner, Jill Palmer, funeral arranger for Lodge Brothers Windsor Branch, to take part in a 9km walk in aid of Hearing Dogs for the Deaf.
Here is Jill’s account of the day:
“A bit of background about rescue dog Nell, when I say she was rescued you could say she rescued us and has given us a lot of joy and a healthier lifestyle in the brief time with us.
She was originally rescued from Greece by a couple from Lancashire on holiday, John and Liz, and was brought back to the UK. Unfortunately, shortly afterwards and very suddenly John died leaving Liz to make a very difficult decision about what was best for Nell.
We met Liz through a mutual friend and we were very lucky that Liz entrusted us with the care of Nell and she has been with us ever since. She has changed our lives forever.
You can only imagine the difference a specially trained dog makes to the life of a deaf person. Things that we take for granted in the hearing world, like not hearing the sound of a fire alarm, would have serious consequences if charities like this were not able to provide support, by enabling deaf people to have not only a wonderful companion but also one that could in fact save their life.
Over a hundred dogs of all shapes and sizes turned up with their owners to support the event.
After a lot of barking, sniffing and a few scuffles (and this was just from the owners!) we all set off at 11am around the Great Park to raise awareness for this charity.
It was a bit chaotic with all those dogs and owners. It would seem that Nell is competitive and was not too happy at how slow I was and so I was dragged around most of the circuit and finished a very reputable one hour and 45 mins later.
I understand that if she had not been tied to me she would have completed it a lot quicker…..these humans….so helpless!!
During the walk we saw deer, rabbits and cyclists….all three getting a very rowdy reaction from the dogs. A particular incident with an extending lead and a speeding cyclist added to the excitement.
Along the way Nell made a new friend, Max the Border terrier and along the route put the world to rights as they dragged their humans around the course.
Crossing the finishing line, a very muddy dog and owner but it was worth it because Nell got some treats by a human dressed as a dog (not impressed! Do you ever see a dog dressed as a human!! Really!!)
So far we have raised £190 for the charity with some to come in as yet.
Here at Lodge Brothers we try to get involved in all sorts of community projects and this was an opportunity to get involved in another worthwhile cause.
Many thanks to my colleagues, friends and family who have sponsored me for this event.
Nell’s popular face book page has prompted the idea of a book which will be an adult spoof of a children’s book and everything will go to the charity. A printer has agreed to print it for us and now we are working on the illustrations………….with the approval of Nell of course who wants to ensure we get her best side!”

Cookies
- Our site uses cookies to improve your experience. Read More
Okay
BRANCH LOCATOR CALL US
We are sorry but we are unable to process your floral order within 48 hours of the funeral. Please telephone our office on 0208 818 7725 for further advice
Jun 25, 2022 00:07:56