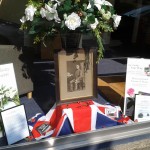 Sandra Keywood, branch funeral arranger at Lodge Brothers Esher, has commemorated the Centenary Anniversary of the onset of WWI with a marvellous window display featuring photographs of her Great Grandfather, Private Albert The who fought in the war.

Private Tye was the Son of Mr and Mrs Tye, of 17 West Avenue, Southall and husband of Sarah Jane Tye of 17 Hammond Road, Southall Middx
He was in the 1st/8th Bn., Middlesex Regiment and died aged just 28 years old, on Saturday 1st May 1915.
He is remembered with honour YPRES (MENIN GATE) MEMORIAL, Ieper, West-Vlaanderen, Belgium.

Sandra has also typed extracts from his diary, which are shown in the frame on the left.