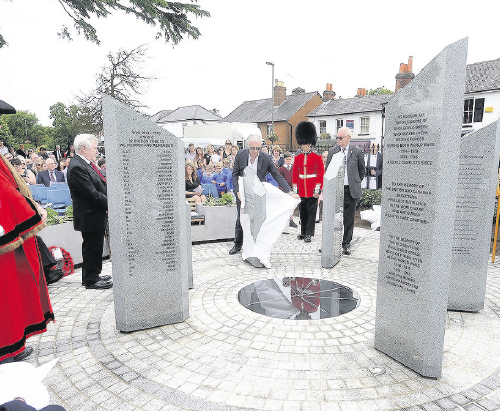 Nearly three years ago, Englefield Green resident John Scott, commented to friends that the village’s fallen heroes of the World Wars and of conflicts around the world had not been properly recognised. He set about fundraising, so that a monument could be provided to acknowledge the role played by the 205 servicemen.

Last month the beautiful memorial you see in the photograph was unveiled by the Lord Lieutenant of Surrey during a special ceremony. The monument, which comprises seven granite columns featuring the names of the servicemen from the village, was engraving and installed by the skilled staff of Lodge Brothers Memorial department.
Mr Scott had ventured into the Englefield branch of Lodge Brothers and met with Area Manager, Richard Leachman, and the then Arranger, Susan Areington to discuss his vision. This was subsequently shared with Mr Chris Lodge, one of the Directors of the Company, and the result (after much deliberation and hard work) was seen for the first time by an invited audience of one hundred people.
(More information can be seen here http://www.szerelmey.com/englefield-green-war-memorial)