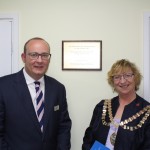 On Thursday 16th October 2014, Lodge Brothers Funeral Directors in Brentford held a Ceremony to officially dedicate the Chapel of Rest after an extensive refurbishment project.

The Worshipful Mayor of The Borough of Hounslow, Councillor Corrina Smart, was guest of honour.

Paul Bye District Manager for Lodge Brothers in West London, opened the proceedings by welcoming the Mayor and all the guests to the new style premises, explaining that 17 years ago to the day Lodge Brothers opened the doors of this branch in Half Acre Brentford having moved from Avenue Road. Branch Arranger Valerie Perkins, who has been with the company for nearly 30 years, has served from both premises.

The Dedication of the Chapel of Rest was led by the Reverend Russell Winfield of St Paul’s Church, Brentford, and was followed by a reading by Father Gerald Quinn, from St John’s Catholic Church.

After the Dedication, Beverley Lodge, Director of Lodge Brothers said she believed the new-style premises would further enhance the company’s local reputation and create a warm and comforting setting for bereaved families.

She added, “Our business was started in 1780, over 230 years ago. Today, Lodge Brothers is run by the seventh generation of our family. We are very proud that we now have over 40 branches and yet we are still a family company, dedicated to up-holding traditional family values.”

The Mayor was then invited to unveil a plaque officially marking the service and afterwards guests were invited to enjoy a cream tea.