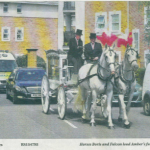 Lodge Brothers Of Ashford were able to make the funeral of Sitha Amber Kathan (known as Amber) “the fairytale ending to her short and meaningful life” according to her mother Averil.

A horse and carriage led the funeral procession through Sunbury and Ashford last Friday, to the service at St Michael’s Catholic Church in Ashford followed by a cremation at Hanworth Crematorium. The horses wore bright feathers on their heads, the coffin was decorated with a colourful daisy design and the procession was also joined by representatives of St John Ambulance.

Amber’s mother explained, “She was a head turner as she rode through the streets of Ashford on her final journey to peace and tranquility. Amber was dressed in bright psychedelic colours – her favourite outfit, and a garland of deep red roses was her crown, framing her lovely face like a modern day Madonna. She was carried in a casket of daisies dancing against the bluest of skies – dancing free at last.”

Cookies
- Our site uses cookies to improve your experience. Read More
Okay
BRANCH LOCATOR CALL US
We are sorry but we are unable to process your floral order within 48 hours of the funeral. Please telephone our office on 0208 818 7725 for further advice
Jun 27, 2022 06:17:35