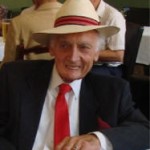 On Friday 24th April the village of Bisley bid a traditional ‘farewell’ to one of its oldest residents, Mr Peter Fuller.
Mr Fuller had lived for many years next to St John’s Church, Bisley.
He died in Woking Hospice on 4th April aged 90 years.
His beloved wife, Mollie, predeceased him in 2011.
Mr Fuller’s Funeral Service took place in St John’s Church, Bisley which was full to capacity with standing room only.

A Royal British Legion Standard Bearer was also in attendance. The service was followed by a private cremation.

His coffin was borne from Lodge Brother Funeral Directors in Goldsworth Road, Woking to Bisley Church in a Horse Drawn Hearse following a route planned by Mr Fuller’s son, Richard.

Cookies
- Our site uses cookies to improve your experience. Read More
Okay
BRANCH LOCATOR CALL US
We are sorry but we are unable to process your floral order within 48 hours of the funeral. Please telephone our office on 0208 818 7725 for further advice
May 24, 2022 19:05:20