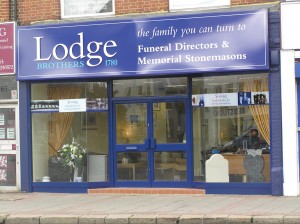 The new funeral home at 65 High Street, Walton-on-Thames will be managed by Robert Lodge, a seventh generation descendant of James Lodge who founded Lodge Brothers in 1780. He will be assisted by experienced Funeral Arranger Ann McMurray who is moving from the Lodge Brothers branch in Esher.

Commenting on why the company had opened in Walton, Robert Lodge explained “We have considered opening in Walton for a number of years but have been waiting for the right location to become available. The new branch is an important addition to our other local branches in Thames Ditton, East Molesey, Esher and Weybridge.”

The new premises have been extensively refurbished to provide comforting and informal surroundings, including a Chapel of Rest and a private meeting room for families to discuss funeral arrangements.

Lodge Brothers have been helping and advising families in Surrey and West Middlesex for over 225 years. Today the company is run by six members of the Lodge family (Andrew, Christopher, Michael, Beverley, Janet and Robert) who are the seventh generation of family owned funeral directors.

As well as arranging and carrying out funerals, the new Walton branch will be offering advice and help with flowers and floral tributes, memorials and pre-paid funeral plans.